Keno has been a very popular game that has been played for over 3000 years so there must be something about the game that has let it continue to be one of the more popular games played worldwide and the reasons are simple: It’s fun and easy to play.

I would recommend for beginners trying out the Keno game at Classy Coin Casino (Now Closed: Try Power Keno at WinADay instead). You can play for free(with play money), you get $25 free no deposit in REAL MONEY, and it is an extremely simple game to play. Here’s a screenshot: 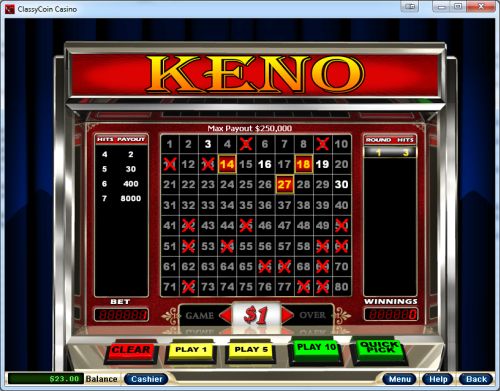 To begin you first must figure out which numbers (or spots as they are often referred to as in Keno) you would like to play with; it can be your lucky numbers or completely random numbers, keeping in mind that in the game of Keno the fewer numbers you play, the higher percentage of those numbers you will have to hit to win any large amount of money, for example if you were to bet 5 numbers and catch all 5 you would win 50 times your original bet but if you were to play 15 numbers you would only have to match 9 of those 15 to win the same 50 times your original wager increasing significantly with each additional number matched.

After selecting numbers you next step is to choose how much you’re willing to wager on that set of numbers if you’re feeling lucky bet big or got a bad vibe then bet low. After you have chosen your numbers and decided how much to bet then you are ready to play. After the 20 completely random numbers have been drawn you are hoping to match as many numbers as possible to the numbers you choose the more you match (or Catch in Keno lingo) the more you win based on the casinos Keno payout table.

Ok well Dummies is a strong word how about we say Keno for Rookie Players. Below is a step by step list for first time players:

As I recommended above – hit up Classy Coin Casino (Now Closed: Try Power Keno at WinADay instead) for a really simple Keno game.