For the fun lovers of keno games, one must play game is Keno Master Casino. Keno is one of the oldest casino games in the world and the app game resembles the real lottery game. You may play the game on your android device and get to earn credits after wins. Among the features that come with the keno master game are auto play, auto stop, auto quick pick and real time global statistics. Below is a fully featured Keno Master android app review for keno enthusiasts and anyone else who would want to experience the fun world of Keno.

What is Keno Master?

Keno master is an android app game that closely resembles the lottery game. With the ever evolving mobile technology in terms of graphics and processing power, the game takes an advantage of this to bring you top notch graphics. This, together with the amazing high definition sound bring you the ultimate mobile gaming experience. Downloading and installing the latest version of the android app has been made quite an easy thanks to the android platform and google play. After the short installation process you are good to go. Be sure to accept and receive updates of the Keno master app so as to stay up to date with the latest edition on your android device. 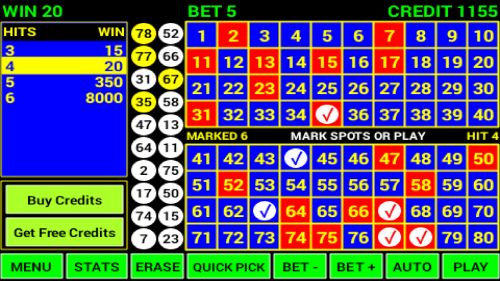 The current version of the Keno Master game features multiple attractive themes that include classic, choco, twilight and zen to suit the users preferences. The game also has variable game speeds that one may select from namely slow normal and fast. For beginners, the game speed may be set to slow and then increased as you proceed. In case one needs further assistance in playing the game, the instructions page is the right place to refer to for anything you may need to know regarding the playing of the game. There are also free tips for the newbies providing them with the much needed information to get to learn the game fast and easy. However, this might not always be necessary as the game displays all the important information on the screen at all times. Another cool feature of this game is the auto play and auto stop options. These cool buttons eliminate the task of having to press the start button during each and every round, ultimately saving a lot of time. The auto play feature triggers the game automatically. The game sounds may be turned off or on depending on the player’s preference or suitability of the surrounding you are in when playing the game. During game time, you may get real time global statistics, real time auto play statistics and also bonus credits. However, since the game is meant for entertainment purposes only, the game credits earned have no real value.

How to play Keno Master

The aim of the Keno master game is generally similar to other Keno games; matching balls generated to win. To play the game you need to first decide on how much you want to bet and then pick between one to ten numbers from the set of 80 provided. After placing the bet, the amount a player wins is directly proportional to the number of initially selected balls that match to the randomly generated 20 numbers.

Simply put, the rules of the game are as follows; To play, you first place a bet by tapping ‘BET-‘ or ‘BET+’ then pick one to ten numbers that are referred to as spots. The next step is to tap the ‘PLAY’ button and the 20 numbers are drawn from a pool of 80. To the left of the screen, there is a pay table that shows how much you can win. The amount you win depends on the number of marked numbers that match the drawn numbers.

Keno Master has received high ratings in most of its reviews for instance, on goggle play, it boasts of having a rating of 4.2 stars. The high ratings may be attributed to the app’s look and feel that closely resembles the real keno game. Even after playing the game for a considerable period of time, it is unlikely for boredom to set in as there are enough options to change the way the game is played.