In this eXtra Keno ios app review, you’ll be able to learn everything about the game including its features, how to play it, its rules and know what other players are saying about it. Sounds, interesting? Let’s go!

What Is eXtra Keno?

The eXtra Keno is another Keno game. A soft betting, family and fun geared type of game that allows you to experiment the casino rush without going bankrupt. It’s totally indicated for everyone, especially for those aged between 18 and older, but it’s so family geared that even kids can play it.
It has amazing graphics for an increased gameplay, amazing screen detail and superb intuitive graphics and design. Feels just like any other Keno game, only that this really has that little extra something, or should I say, eXtra. 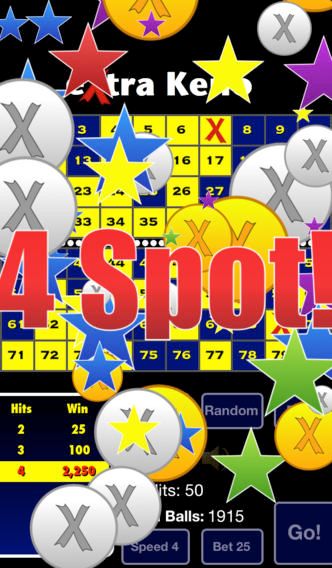 A free game, obviously.
You can bet as much as 1,000,000 credits per game.
There are variable speeds. The faster ones make the game more challenging and interesting to play.
You can Save Credits between sessions which is a wonder compared to other Keno games in which you just lose everything you’ve done so far.
In both iPhone and iPad, this app includes a Win-Meter for you to check your winning streak, stats, and much more cool info.
It’s a free game but has in-app purchasable elements.
Another Casino Quality Keno game for the whole family to have fun.
Unlimited free credits.
100 FREE credits every time you run out of them.
You can choose 5, 10 or 20 more balls as standard.
Buy 100K Credits for $.99 cents.
Buy 1,000,000 Credits for $1.99 cents.

How To Play eXtra Keno

Playing eXtra Keno is very easy and fun. But first you need to have the app properly installed in either your iPhone or iPad devices. Once installed, simply tap the game’s icon once and the game will open for you to play.

Make your bet. You must have credits. If you’re just starting out you might have 100 Free Credits. However, if you have no credits, you’ll need to make In-App purchases of either 100K Credits for $.99 cents or 1,000,000 Credits for $1.99 cents. After you have your credits in your account, just select your bet and hit Go!

Once you hit Go! You’ll need to wait for the random number selection to display. It will be matched against your picked numbers. The more numbers you make right, the more points, free credits, and extra games you’ll be able to learn.

Remember to also set your desired speed prior to hitting Go! This way you’ll play in the game difficulty that you most like.

You can only choose the max amount of numbers. Once you hit Go! You can’t stop the game after its running. You can bet max 1,000,000 Credits unless an update changes this option. After you’ve set your selected amount of bets and game configurations, you cannot change them once you hit Go! In free games, your luck might not be that great and you might also not win anything. Now let’s check what other players are saying about this game.

OK! I guess that this is enough for you to pick the right buttons to push and make your choice. Go to the App Store and let us know later on what you think about it too.