What is Traditional Keno

This Version of Keno looks fantastic and runs fast and lag free. It is set like you’re in some ones living room complete with the game being in the middle of a couple of plants and in front of a curtain.

A nice a basic version of Keno that all players will be able to enjoy no matter the skill level or experience. Includes a round breakdown and a potential win chart

Where to Play Traditional Keno 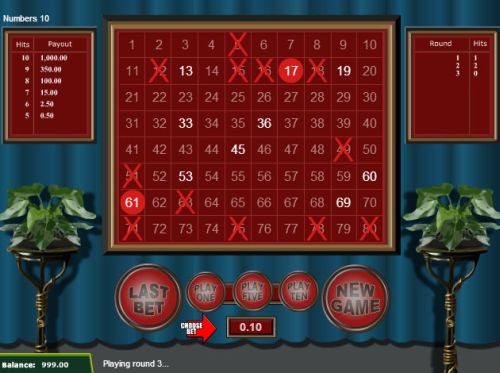 You can play Traditional Keno by heading to VideoSlots.com (Doesn't accept Americans; play Power Keno at WinADay instead. where in addition to 7 amazing versions of Keno they also have a crazy number of available games for players to play.

Video Slots is a great Browser based Casino that will run on every browser out there.

Once you arrive at VideoSlots.com (Doesn't accept Americans; play Power Keno at WinADay instead. you will need to first register an account with them, which is a free and quick process. After you have finished you will now be at the main screen of Video Slots Casino. You will see on the left of the screen all of the games are broken down into categories. The Keno games are listed under the Other Games menu option.

This is a nice and basic version of Keno that looks great and runs even better. Here is a list of some of the features available in Traditional Keno at VideoSlots.com (Doesn't accept Americans; play Power Keno at WinADay instead.

All of the standard rules for Keno are used here. You can choose any number of numbers from three numbers up to ten numbers. Choose your numbers by clicking directly on the number, it will be highlighted in white once it is selected.

Choose your wager amount by clicking on the Wager listed below the Auto Play options. When ready decide if you want to play one, 5 or 10 games by choosing the appropriate button.

A great and simple version of Keno that players new to the game will appreciate as it lets them play just the game with no distractions. The game itself runs incredibly fast and smooth. Even though it is a basic version it still has the always nice Auto Play feature and also Last Bet. Both of these features allow you to play games faster.

This version of Keno may not appeal to players who are familiar with the game or who have come to expect lots of special features.
But if you are looking for a nice and straightforward version of Keno then be sure to head to VideoSlots.com (Doesn't accept Americans; play Power Keno at WinADay instead. and give Traditional Keno a try