This one is different than the others as it is a Bonus Keno Scratch Card. Here’s how it looks:

So we have the 20 numbers to scratch off as is standard. However the odds for this one are better at 1 in 2. Then there’s a fast $5 where we just need 2 numbers on either. Finally there is an additional game where we get 3 $1 Daily Keno free plays. That’s pretty cool.

The last two scratch cards were just single card keno games – this one adds a few incentives with the bonuses so I’m quite excited to play. The odds of winning are apparently 1 in 1.86 which is pretty sweet. 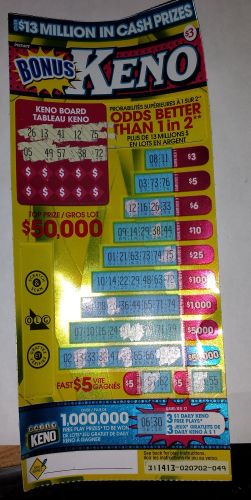 Okay, that was a GOOD one!!! We’re now halfway there to the $50,000 prize at the halfway mark of scratching the numbers. We also are just one away from a $5 prize on BOTH of them.

I’m feeling good. This is going to be a winning keno scratch card I can feel it. 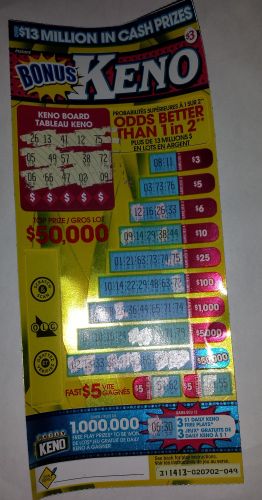 So are you guys ready? Fingers crossed….#33 and #65 is all we need for a big pay day. And I’ll buy everyone reading this blog….I dunno, a hot dog or something. Hey it’s my money!

Alright let’s do the final row….

And the second number is 44. Bummer. Although that gives us just 2 numbers left needed in the $10 prize row.

Fourth number….3. I saw the 3 and got excited. Damnit. Another one no help. 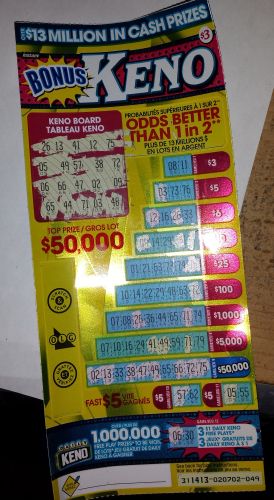 Must admit I really thought we were going to get the $50k prize haha. Oh well what can ya do?

Stay tuned to the blog for more Keno scratch cards in the near future.